Esophageal Research Center Opens with Help from the Kardashians 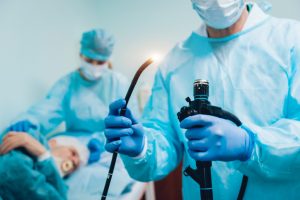 The Robert G. Kardashian Center for Esophageal Health is the newest addition to the UCLA Vatche and Tamar Manoukian Division of Digestive Diseases. The center is a collaboration of UCLA’s experts in gastroenterology, oncology, anesthesiology, surgery, pathology, radiology and pediatrics, all dedicated to the prevention, diagnosis and patient-centered treatment of esophageal diseases.

Robert Kardashian was a prominent businessman and lawyer from Los Angeles. He is most remembered for representing O.J. Simpson in his 1995 trial, and for being the father of Kim, Khloe, Rob and Kourtney who are on the television series Keeping Up with the Kardashians. Mr. Kardashian was diagnosed with esophageal cancer in July 2003 and died just two months later, at age 59.

Kim Kardashian West and her mother, Kris Jenner, along with other family members, attended the ribbon-cutting ceremony honoring her late father. After the event, Kim tweeted, “So proud to announce the Robert G Kardashian center for esophageal health being launched at UCLA. My wish is that other families can have more information and we can also focus on health and prevention.”

What is Esophageal Cancer?

Esophageal cancer begins when cells in the esophagus mutate and divide abnormally. This cancer is the sixth-leading cause of cancer death in the world because it is fast-growing, aggressive and has few symptoms.

Incidence of esophageal cancer and esophagus disorders has increased dramatically in the past decade. Risk factors include alcohol and tobacco use, obesity, poor nutrition and gastroesophageal reflux disease (GERD). Chronic acid reflux damages the lining of the esophagus and can cause a condition called dysplasia, which increases the risk for Barrett’ esophagus, a precursor to esophageal cancer.

How to Lower Your Risk for Esophageal Cancer

You can take proactive steps to lower your risk for esophageal cancer by adopting healthy lifestyle habits.